[quote name='Crom']It never resets, what happens stays in the comics history. Of course you cant catch up with all of what happens in the DC universe, but its not too hard to catch up on the specific character you're interested in. And usually, if they talk about something important that happened in the past, the character themselves will usually give a little recap so the readers know what happened.

Like when Vixen's leg gets broken and gets all depressed.

And Lex Luthor freaking out about his son being killed or something?

And one of the Flashes getting revived by a lightning rod or something by people 1000 years in the future?

Some dude getting Terra's Powers?

Canary Leaving the team is also never explained in this line.

A Random character from an alternate dimension called Flash (Its a girl in purple) is introduced and never done anything with.

The Martian Man-Hunter is randomly killed by some god cause a arsonist wants revenge on him.

And I think that sums up everything I don't understand up to volume 39.

Like when Vixen's leg gets broken and gets all depressed.

And Lex Luthor freaking out about his son being killed or something?

And one of the Flashes getting revived by a lightning rod or something by people 1000 years in the future?[/QUOTE]

Yeah those are all huge events that recently happened with those characters. What issue are you on? Usually since it everyone at once in those books its bound to have everything tied in. After things cool down itll go back into normal issues and less tie in stuff and will have its own story archs.

Theres always tons of JLA TBP's you can get with full story archs if you want to just read those without worrying about tie-ins or crossovers.
A

Jesus Christ how do you read 39 comics in 2 days? lol, Manga I can see, but comics take way longer to read. And yeah, like I said, theres always tie ins which is why its hard to understand whats happening some times and to get the full picture you sometimes have to check out other storys.

Heres more Justice League goodness TPBs, full storys with no current confusing stuff. The ones written by Grant Morrison are VERY good. Arguably the best JLA or super hero team book ever written. These will be easy to follow and entertaining. Seeing as how youre blazing through them youll need more to read. 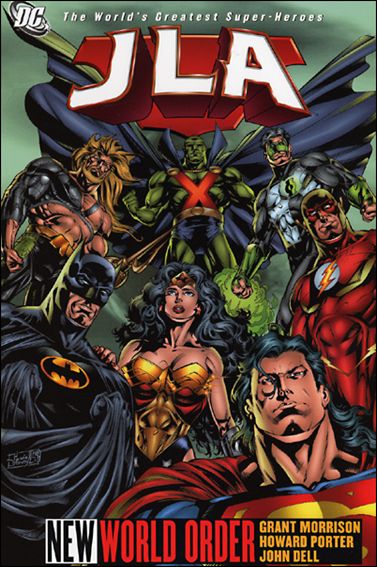 Posing as a new group of super-heroes, the Hyperclan have descended upon Earth, convincing everyone that they are a benevolent force. But as their true nature and plans come to light, only the World's Greatest Heroes can stop them. Standing side by side, Batman, Superman, Wonder Woman, Aquaman, the Flash, Green Lantern, and the Martian Manhunter take on these alien posers and come to realize that Earth needs a guardianship made up of only the mightiest of icons. 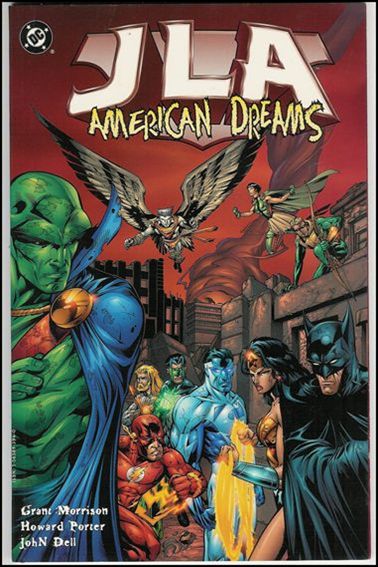 Written by Grant Morrison; Art by Howard Porter, John Dell, and others

The World's Greatest Heroes have reformed the Justice League of America to act as Earth's protector against all threats. But as Wonder Woman, Aquaman, Batman, the Flash, Green Lantern, and the Martian Manhunter are joined by a Superman demonstrating new and different energy-based powers, they find themselves facing off against deadly old enemies like the Key and getting caught in the middle of a war between Heaven and Hell. Featuring appearances by Supergirl and the new Green Arrow, this trade paperback also includes the first appearance of rogue angel and future JLA member, Zauriel.

Written by Grant Morrison; Art by Howard Porter, John Dell, and others

It's cosmic adventure on a grand scale as the Justice League faces off against Lex Luthor's newly assembled Injustice Gang while the fate of the Earth itself hangs in the balance. To make matters worse the Justice League is informed that Luthor's ultimate weapon, a mystic stone of incalculable power, must not be destroyed. And that's just the beginning! Later in the far flung heroes of the 853rd century and the machiavellian manipulations of the vile god Darksied and the result is, quite literally, a race through time to put a stop to an evil that threatens all of existence! 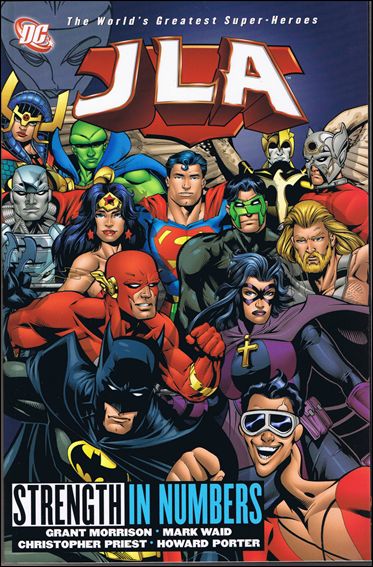 Written by Grant Morrison and Mark Waid; Art by Howard Porter, John Dell, and others

With Superman, Batman, Green Lantern, Wonder Woman, the Flash, Martian Manhunter, and Aquaman as members, the JLA was made up of the greatest heroes in the universe. But as old foes create unholy alliances and new enemies attack out of nowhere, Batman realizes that the team must increase its numbers. Joined by such new allies as Plastic Man, Steel, Zauriel, the Huntress, and Oracle, a truly almighty team comprised of super heroes, aliens, gods, and monarchs prepare for battle against any and all threats.

Am I not supposed to?

They're only around 24 pages a chapter/volume/comic.

Am I not supposed to?

They're only around 24 pages a chapter/volume/comic.

Lots of text is what I mean. I'd be able to run through 24 chapters of manga with ease, because theres not much. Not a bad thing.

And on terms of the topic I was originally gonna suggest what I just posted, but didnt because i figured everyone wants new fancy art those things. Youll be better off with those. Ill post more if you want them, or when youre done with them.
A

It didn't clearly say in JLA.

I liked him from the animation.

It didn't clearly say in JLA.

I liked him from the animation.[/QUOTE]

J'onn is back now along with Aquaman and a couple others. Their story is currently being covered in Brightest Day, and the prequel to that is Blackest Night. In Blackest Night J'onn, Aquaman, and a few other came back from the dead as emotion sucking zombies.

Them back from the dead during Blackest Night.
A